Attention Comrades! Be advised this area is now part of the Exclusion Zone. Please gather your belongings and documents and depart immediately. Report unusual activity at once. There is no cause for alarm. Party Officials have everything under control.

Welcome to the TWILIGHT WORLD, a place like and yet unlike our own. This world's history is a darkened fun house mirror of our own. Here, the monsters are real.

Set in the Twilight World's 1980s, players of Party First explore this darkened universe through the lens of the continent spanning communist USRA. Will you be a governmental bureaucrat, a party true believer, a military special agent, a folk occultist, a black market smuggler, or something else entirely? The choice is up to you, but remember that when the darkness comes knocking, your loyalty must be to the party first.

With this book and a set of 6 sided dice, you will find everything you need to get started with a game of Party First. Inside is an overview of the state of the Twilight World in the 1980s and how the USRA came to be as well as a wealth of occupations and skills to fine tune your character. Additionally, it includes a chapter with tips on running horror games and two stand alone starter adventures to introduce your players to the universe.

In order to download this game you must purchase it at or above the minimum price of $4.99 USD. You will get access to the following files:

It's 48 pages, with strong graphic design and a clean, readable layout that reminds me a bit of Delta Green or NWoD. And it's got mechanics that feel like a mid-point between NWoD, Dogs In The Vineyard, and Arkham Horror.

Character creation is interesting and layered, and starts with choosing a Class. The Class provides the bulk of your numbers and abilities, and you make some further choices refining it. Oddly, you may not have two people from the same Class in the same party, but there's plenty of Classes to choose from and each one has a clear niche and flavor.

Character abilities are also fun and give a lot of agency to the players; usually offering either a chance to spend one of the game's many currencies for a powerful effect or a chance to accumulate those currencies.

The stat and skill lists are also nice and tight, and HP has two tracks---Health and Sanity---a la Arkham Horror.

Setting-wise, Party First's version of earth is basically our earth with a big fake mustache. And also monsters.

A lot of places and people from our history have been slightly renamed (Rus instead of Russia, Tsiberia instead of Siberia, etc) but the specifics are otherwise largely intact. Maybe the most significant deviation is that Russia took a nontrivial piece of Japan at the end of WWII in Party First's history, creating a second east/west Germany situation, but there's also some less geopolitical beats like Rasputin surviving and also nuclear blasts and gasses transforming people into monsters.

Reading all of this had me expecting a sort of Call Of Duty take on the Soviet Union, but while Party First still feels like it's written from the outside looking in, it reminded me more of Wolfhound Century than anything else. The average USRA citizen is depicted as torn between tradition and modernity, cynicism and hope, self-advancement and public good.

Mechanically, Party First feels extremely solid. There's an emphasis on choice and resource spending in the rules, which perfectly complements the game's survival horror elements, and there's also some cool innovative leaps. For example, the group shares a pool of Morale. Morale can be spent to fuel certain abilities, or to gain some extra dice on a roll, or depleted when a PC dies. And if the group's Morale ever hits zero, the group dissolves and they all lose.

There's a similar tension between group survival and individual survival in regular skill rolls, as players can choose between rolling a Party Skill or their own Personal Skill on each check. Rolling the Party Skill might mean limiting your odds of success, but it also gains you Party Points (another spendable resource) and gives the GM a chance to gain Tension Points (another spendable resource that the GM burns to set the TN on rolls.) And on the flipside, rolling your Personal Skill costs a Party Point, but it can restore Morale.

Learning the core mechanics takes a minute, but afterwards the game has a really clear flow, with the players and GM both having a lot of control over when and how to influence the course of a dice roll.

As far as GM tools go, there's a solid bestiary and some flexible resources for monster creation. There's also a dissection of a few elements of horror genre, and finally two scenarios (one similar to Who Goes There, and the other to Annihilation.)

There's even more scenarios sold separately, so if you like running well-written premade content this is probably a good pick if you want to do some horror one-shots with your group. But with that said, there aren't really safeguards built into the engine. You'll need to add your own.

Overall, Party First is an extremely interesting and dramatic survival horror game with a soviet era dressing over its engine. If what you want first and foremost is to play a game set in cold war Russia, this might not completely be what you're looking for. But if what you want is to band together with a close group of friends-of-circumstance and hold out against reality-threatening horrors, this does that with style. 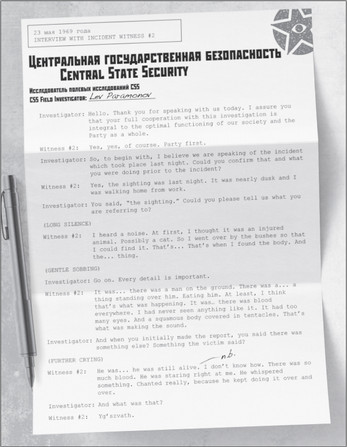 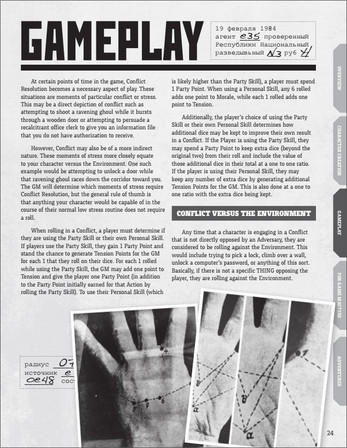 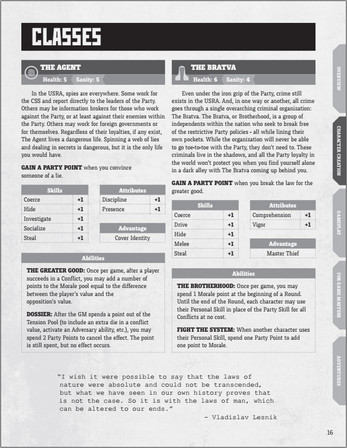 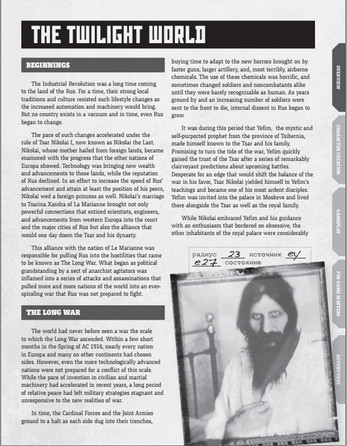