Day after day, moment by moment, you feel it staring and waiting.

You feel the pressure on your skin, your bones, your soul. Can it truly see?

You do not know.

One White Eye is a solo horror RPG on a single page. Inspired largely by classic Edgar Allen Poe tales of suspense and terror such as the Pit and the Pendulum and The Tale-Tell Heart, One White Eye places players in the shoes of an imprisoned protagonist. What you may have done or not done to deserve this fate will be revealed as you play. All you need are a d20, a d6, and something to record your journal entries on.

Be warned that this game only ends in despair.

In order to download this game you must purchase it at or above the minimum price of $1 USD. You will get access to the following files:

Inspired by the worlds of Poe, you are imprisoned in a dark cell with only a yawning pit before you, and scraps of paper. The Eye is always watching, and you are always writing. But is what you write the truth?

One White Eye is the game that started the Second Guess System! To play you roll 1d20 and answer the corresponding prompt. But when you roll the same number again, you take a look at what you had previously written and decide if you were telling the truth.

You also add one point of dread each time you roll the same number. As your dread accumulates you roll 1d6 and if you roll over, you live another day, if not, you have given into despair.

My character only lived for 10 rounds and eventually succumbed to believing the eye was a religious being. You can read my playthrough Here

Great concept! A very intriguing way to examine the human psyche while playing a game. I really enjoyed the Edgar Allen Poe feel. Very chilling and unsettling at times, but done in the right way.

Do make sure to check out the sequel/expansion game, Exploring The Eye by jwalberg. It gives a brand new way to connect multiple playa with interludes from the perspective of the Eye!

First, thank you very much for making this ;) I have enjoyed journaling RPGs since summer 2020, and yesterday I wanted to play something under an hour and One White eye is perfect for this - although you can play it longer I am sure!

This dreadful game gives you an uncomfortable chill on your back, the one you get if people stare at you. The eye brings all kinds of feeling to the surface, from being nervous because something stares at you to guilt to anxiety. The prompts are great inspiration and motivate to explore the background and thinking of one's character.

I really liked the mechanism of laying, which underlines the atmosphere of being in a cell and watched. The dread mechanism is perfect to end the game before it gets repetitive, which in my feeling is a weakness of prompt based journaling games.

One advice for the dread mechanism, I think it made my flow of writing better and consistent: every time I gained a dread point, my character described how more and more the pit called for him, and he felt pulled towards the darkness. This makes the end less abrupt and gives room to finish with a hint what might happen next...

Only the design makes the game a bit hard to read, gray background  and  black fonts aren't the best combo in my opinion. Further, the font type changes when it comes to the prompts and the font type is very thin, which I don't like and makes it even harder to read, but that's the reason why we have a zoom function! Despite that, I really like the design with the borders and the creepy eye on top.

If you're enjoying seeing your isolated character going down the Kafkaesque spiral of mental deconstruction, this game is for you! Everyone who played a wretched & alone version will have a great or a dreadful time ;)

I've been fascinated by the concept of solo tabletop games ever since the release of the Lord of the Rings LCG and my realization that a coop card game meant that it could be played solo as well. I had not followed the thought through to RPGs until more recent years, however, but among other things in 2020, I discovered Wretched and Alone and the many games based on it, English Eerie, 1000 Year Old Vampire, and more. And those concepts just wouldn't leave me.

So, while out running on Thursday evening, a nugget of an idea hit me. The name, One White Eye. Sometimes ideas hit you like that. A singular phrase or image, that you can't shake. This time it was both and the fixation on that one awful body part led me straight to Edgar Allen Poe's The Tell Tale Heart.

But why fixate on an eye in particular? If I wanted to use this idea for some type of game, then the player will need to do something to or have some relationship with the eye. Hearts of course, represent life, but what's the strongest connection for an eye? What do they do? They see. They watch. And so, I hit on the idea that the player was being watched.

From here, I needed a reason for the eye to be watching. And what's more, I needed a way to fixate solely on the eye and to not let the bearer gain too much focus, nor for the player to be able to leave the eye behind and no longer be tormented by it. Aha! The player must be imprisoned in some way. Which leads, naturally, to another Poe story, The Pit and the Pendulum.

Now with the heart of the setup established, I had only to craft a game system. This also came quickly with the realization that a game of such narrow scope really only needed to be a single page. Thus, the system would have to be short and tight as well. As mentioned, I've been researching a great deal of Wretched and Alone games over the past few months. It's a great system and setup. I only had to figure out how to strip it down in size as 52 prompts is a great deal to fit on that single page. I needed a smaller number, but still needed some random determination to change the flow of the game. And thus, a d20 with twenty prompts.

Of course, one of the best features of W&A using a deck of cards is that it eliminates the recurrence of the same prompt more than once. With a d20, this is a problem, unless you institute a reroll each time you get a number you had previously used. But a simple reroll felt narratively and mechanically flat. Where's the risk or reward in this game? How does it end?

Which lead straight to the idea that the game won't stop you from rolling the same numbers and prompts, but it will twist what happens. Everyone lies all the time. They lie to each other and the lie to themselves. What if each time you rolled a prompt over again you had to admit to something that you had lied about previously in that prompt? Surely someone imprisoned like this has been lying about something.

From there, we just add a quick d6 roll and an escalating tracker of your Dread which must be beaten or elsewise you succumb, and there you have it - a game!

After this, it was just a matter of writing it all down and working up a nice layout on Friday. I hope you all enjoy! 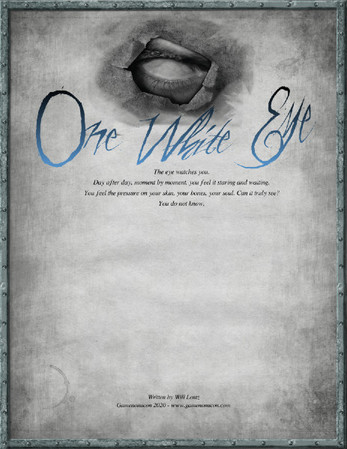